Jonathan Moody enters his fourth year as a college or high school baseball coach, his third with the FACS staff, and his first at the helm of the program. Prior to being chosen as the head coach, coach Moody served as the pitching and infield coach for the Crusaders. Under his direction, the FACS pitching staff surpassed nearly all previous pitching records including team strikeouts, team ERA, opponent batting average against, and several more. Coach Moody comes from Delta State University where he played two seasons under head coach Mike Kinnison. He then went on to take a coaching role under Kinnison in which he served two years as the pitching coach. The Statesmen went on to win back-to-back Gulf South Conference championships in 2016 and 2017. The 2017 team accomplished the feat of winning the South Regional Tournament to advance to the College World Series. During his time at Delta State, two pitchers were drafted into the MLB draft and one was selected as free agent and they continue to progress throughout the minor leagues.

Moody was a two-time All-Gulf South Conference selection for the Statesmen from 2014-2015. The Millington, TN native posted a 14-5 career record with a 3.53 ERA, 137 strikeouts and 38 walks in two seasons. Moody went 9-4 in 2014 and 5-2 in 2015, helping the Statesmen to a pair of GSC Tournament runner-up finishes and a berth in the 2014 NCAA Division II South Region. Moody was selected 4 times as Conference pitcher of the week during his playing career at Delta State.

In 2016, the Statesmen pitching staff had a 2.53 strikeout-to-walk ratio while starting pitchers averaged 6.2 innings per start. The Statesmen posted a 3.56 era with a 418 strikeouts and 165 walks in 488.0 innings pitched.

Moody graduated from Delta State with a Bachelors degree in Social Science and a Masters degree in Business Administration.

Coach Moody and his wife Kara reside in Oakland, Tn. They have one daughter (Kirby, 2) and one son (Jaxton) who was born in October. 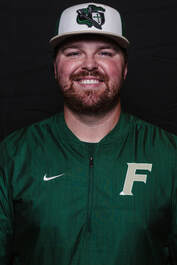 Matthew Mills is in his first season as the varsity assistant baseball coach and his second year on the FACS coaching staff.

Prior to FACS, he coached at Christian Brothers University as a student assistant coach assisting with the pitchers, hitters, and catchers.

The Memphis native played two seasons for Christian Brothers University pitching in 32 games. Prior to enrolling at CBU, he pitched for two years at Southwest Tennessee Community College, where he was both a starter and a reliever, earning TJCCAA Pitcher of the Week twice.

Mills is also a coach for the East Coast Sox competitive baseball organization, and was an assistant coach of the championship team that won the 2017 15u WWBA tournament in Emerson.
​

The Crusader Junior High team is not directly affiliated with First Assembly Christian School. Our coaching staff is not employed by the school and not all athletes are enrolled at FACS.